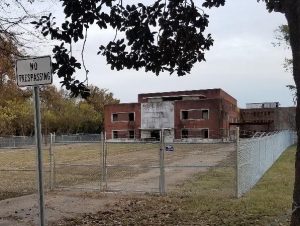 PPM was retained by the City of Vicksburg to manage and conduct environmental site assessments under their three-year US EPA Brownfields Assessment Grant, which started in October 2016.   Services provided by PPM to the City included  completing  Phase  I  ESAs,  preparing SSQAPPs, conducting Phase II ESAs, completing ABCAs, hosting public outreach meetings, and being responsible for EPA reporting, including ACRES database data collection and entry, quarterly reports, semi-annual reports, and annual reports. Highlighted as the catalyst brownfield project in Vicksburg’s 2016 EPA Brownfield Assessment Grant, the Kuhn Memorial Hospital had plagued the Martin Luther King Jr. district for years. The property had been sold six times for taxes, and city officials had been trying for at least 10 years to get the property owner to clean up the property and demolish or renovate the abandoned buildings on the site.  With the assistance of PPM, the City received two $200,000 EPA Brownfield Cleanup Grants in 2017 to remove asbestos from the complex’s two main buildings, excavate an underground storage tank (UST), and deconstruct the structures onsite.  PPM recovered nearly 3,000 gallons of weathered diesel fuel from the UST and had it recycled, saving the City roughly $5,000 in disposal costs.

PPM assisted the City in negotiating a Brownfield Agreement with the Mississippi Department of Environmental Quality (MDEQ) in August, 2018 which provided the City with liability protection.  PPM then oversaw the Bid process on behalf of the City; and on September 10, 2018, the City issued a notice to proceed to the low bidder for asbestos abatement and demolition. PPM oversaw the abatement, demolition, and deconstruction activities, and the Kuhn Memorial Hospital was abated and ultimately demolished in 2018-2019.  During the deconstruction of the buildings, nearly 98% of all metal was recycled.  With PPM contract and project oversight, roughly 9,000 tons of concrete and brick was crushed to meet Recycled Concrete specification (825 B) for Crushed Stone Aggregate.  The recycled material was valued at $126,000; and the City was able to use the material for public works projects.  Outside of the required asbestos disposal, nearly 90% of all materials from the former Kuhn Memorial Hospital has been recycled. On August 22, 2019, MDEQ issued a “No Further Action” letter.

The project was featured by EPA Region 4 in their Innovative Materials Management Fact Sheet in 2020.

PPM was awarded a brownfields contract by Escambia County, Florida to mitigate environmental issues at a former commercial property prior to redevelopment.  PPM conducted several phases of assessment to determine if soil and groundwater had been impacted by previous operations. Arsenic was detected in shallow soils, and PPM delineated the extent of impact, designed a remediation plan, and completed excavation of the impacted soils.   PPM assisted the County with achieving “No further Action” status and the site was redeveloped with an office complex. Escambia County received an EPA Brownfields Showcase Award for the successful redevelopment.